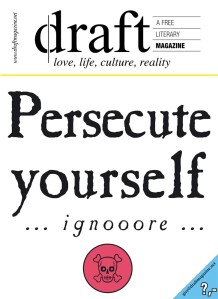 so this is where our promotional activities culminate, it seems, at least for now. everything left to say on this project is there on this little inconspicuous piece of work. i’m well pleased with this, not only design-wise where i’m for instance getting the cute apple dingbats skull out of the dustbin. it works even in tinyiest sizes and the layers of meaning revealing themselves are extraordinary, the more you look at it and really think about it.

about the latter, the shades of meaning, i’ve come across a red-white-and-black packaged dvd of ‘blow up’ the other day, where a brilliant commentary reveals so many more layers that would definitely remain hidden from the casual viewer. crazy thing about this is that most people you get to talk to about this movie are taking the photographer character as a kind of role-model or weird kind-of hero. some even came to london particularly for the ‘purpose’ to ‘find’ the ‘coolness’ that is in fact questioned and even ridiculed by the work’s author michelangelo antonioni. while his actually intended meaning explores the manifold layering of reality or what we generally perceive and define as ‘reality’ (with a self-aggrandizing, obnoxious character without any scruples walking through this construct of the movie’s reality until he’s in the final frames altogether being ‘deleted’ by the very same), most people have come to see the sleek, stylish-ubercool surface as such as their preferred entirety of meanings. which is to say, how hard it is for people to ‘wake up’, particularly in a world where so much glittering fakers all-around are simply ‘dying’ to get our ‘attention’.

back to persecution, well, yes, i’ve been persecuted. but as dafa cultivators, we’re negating the persecution. like i’ve tried to point out in my earlier post, no one can truly persecute upright teachings. but instead, all along, the world’s people have been persecuted through lies and slander and a regime of terror that is particularly more obvious in china. in the west, lies and slander were, for the most part, enough to keep people at the stakes of their own wallowing in denial and ignorance.

which brings us to the NOW. while what you may call evil elements behind the scenes have slowly come to be almost finished and a project like draft magazine for instance has been allowed to make public things and issues that have never been allowed to be made public before (at least not in this ‘casual’ and connotationally ‘cultural’ way) – so in other words, while the state of wordly affairs at the kalpa’s end has been synchronized across the board (with secret services, companies, banks, governments and all the gods behind the scenes pulling the strings) to ‘offer’ mankind a final, grand awakening, it is now only an matter of people on their own persecuting themselves. in allowing myself to be a little bit more explicit (as our mission as dafa disciples is clarifying the truth and thus ‘saving’ people) – even those gods that felt that most of man doesn’t ‘deserve’ to enter a future cosmos of such pristine magnificence as the one forged by the new fa, even they would not actually, de-facto, ‘persecute’ them anymore. they’re still doing ‘their thing’, though. of course. everybody is doing their thing or job. and if a being is more conscious, they’d be merely ‘fulfilling their mission’ …

all unfolding according to a grander scheme, no? who’d dare to obstruct heaven’s will? the only unstable factor, throughout all of history and throughout all traditions, has only ever been the human heart, has it not? each individual sentient being is ultimately on their own. who truly believes that when the sky falls, everyone shall perish at the same time? only a bunch of ‘communists’ maybe, hahaha.

but enough. back to my own cultivation and continuation of projects. lots and lots to do but also increased exercise time now the sun’s out.

hope this finds everyone well.