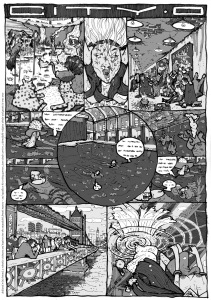 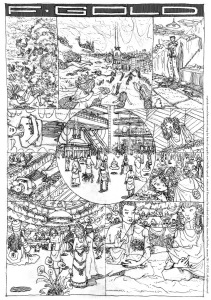 finally new work again. feels great. as i’ve been saying to my friends that ever since finishing the astrology book, i feel like starting my whole life anew. part of this is redefining my stance to art and illustration. somehow the ultimate test and opportunity came along through an inspiring ‘call for entry’ by STERZ, an austrian literature magazine …

we have my ‘old’ style handing over to my ‘new’ style here in this surreal double-spread clash of filmic imagery. colours are not longer needed, at least for the time being. the ink layer and tracing paper (which always reminded me of condoms for some mad reason) are now gone as well, freeing up more time and thus lessening my karmic burden, i guess. what’s left is a more thorough and sensual treatment of lines into the actual matter of paper.

as to the story, i originally had the idea of contrasting an unredeemably depraved babylon with a ‘golden city of jerusalem’ from scriptures. and then there was the association with a woman being like a city, in a way (again we have babylon there and also frank miller/ willl eisner’s ‘spirit’ which also references such gnostic metaphors). it all went from there. hope you like and feel inspired. there’s plenty to look at and to discover for those who are looking and able to see :)